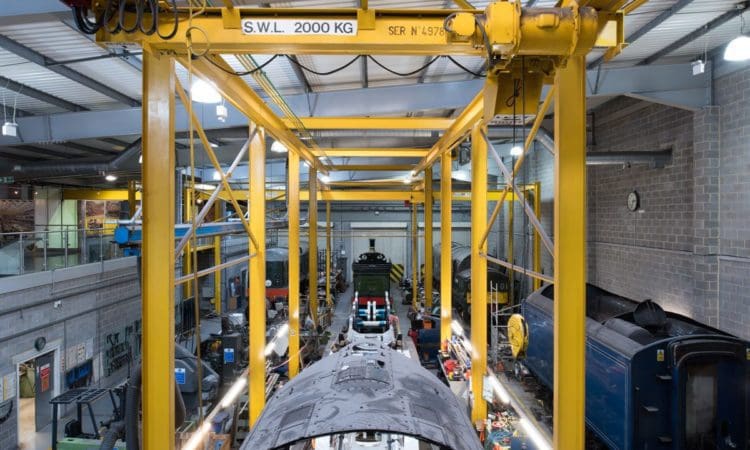 Tim Dunn, Steve Oates, Jo Lewington, Anit Chandarana and Toufic Machnouk will join the now 12-strong board which provides advice and support to the museum’s Senior Management Team on their plans for the future of the museum.

With the collection including over 260 locomotives and rolling stock, 600 coins and medals, as well as railway uniform, equipment, documents, artwork and photographs, the National Railway Museum in York has the largest collection of railway objects in the world and before the Covid-19 pandemic, it attracted more than 750,000 visiters each year.

The appointments of these new members to the board, comes as the museum plans a new interactive space, Wonderlab: The Bramall Gallery, due to open in May 2023.

Judith McNicol, Director of the National Railway Museum, said: “We’re thrilled to welcome five new members to our Advisory Board. Tim, Steve, Jo, Anit and Toufic bring a wealth of experience from different parts of the rail industry and will play a vital role in providing advice for the museum through a busy and exciting time.

“They will join the board immediately and, alongside our existing members, support us in our mission to inspire the next generation of visitors.”

Tim Dunn is a broadcaster and railway historian who is best known for the television programmes The Architecture the Railways Built and Secrets of the London Underground which he presents.

Tim said: “I am delighted to join the Advisory Board: it is a privilege and responsibility that I do not hold lightly.

“As we enter the next phase of delivering the NRM’s Vision 2025 plans and work towards 2025 – the bicentenary of the world’s first steam passenger train service and the start of railways as we know them – the opportunities to bring railway history forward to new audiences and to inform contemporary discourse have never been greater.”

As the first ever Chief Executive of the Heritage Railway Association four years ago, Steve Oates is actively involved in promoting and protecting the interests of heritage railways to Government and other bodies. On becoming a member of the board, Steve said: “The National Railway Museum and the heritage railways with whom they work are the custodians of much of Britain’s transport heritage.

“Preserving, operating, interpreting, and engaging with such heritage requires a good deal of collaboration and it’s a privilege to be able to further strengthen the links between our nationally renowned railway museum and our nations’ heritage railways.”

As Chief Environmental & Sustainability Officer at Network Rail, Jo Lewington is responsible for leading on its commitment to provide the cleanest, greenest form of mass transport in the UK. Jo added: “I’ve joined the board because I believe that the work of the NRM is essential to public engagement and education about the rail industry. It provides a great platform to advancing knowledge and understanding of the railways’ positives on society and the economy.

“I am passionate about engaging everyone in the subjects of environment and sustainability, and the NRM presents an exciting opportunity to bring everyone on that journey and to inspire future generations to get involved.”

Joining the Advisory Board as the Lead Director of the Great British Railways Transition Team, having previously worked in the railway industry for over 18 years and formerly working as Chief of Staff at Network Rail, Anit Chandarana said: “The railway has a rich heritage and has been an integral part of the history of Great Britain for many generations.

“Joining the National Railway Museum’s Advisory Board is an opportunity to help to preserve, celebrate and educate.”

In his role as a Director, Industry Partnership and Digital Railway at Network Rail, Toufic Machnouk is leading on a pioneering cross-industry partnership to create and deliver the next generation railway through digital train control technology.

Toufic hopes to help the museum deliver an innovative future, adding: “The National Railway Museum sits in a uniquely special place between the past and the future.

“In joining the Advisory Board, I am excited to support the museum shape and enable a more exciting, pioneering and innovative future, particularly through the ambitious Vision 2025 plans and the opportunities created by the bicentenary of the railway over the coming years.”

If you’re looking to visit the National Railway Museum, admission is free, however you are encouraged to book in advance via the website: www.railwaymuseum.org.uk