THE Ribblesdale Cement Company’s works at Clitheroe, which opened in 1937, is situated at the end of a short branch just north of the station on the Blackburn to Hellifield line – a branch that was then already serving the Horrocksfor 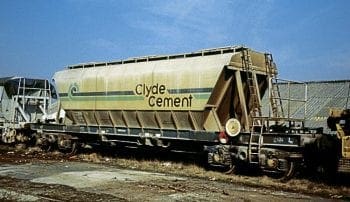 d Lime Company.
Outgoing cement was initially dispatched in bags, but in the 1950s, British Railways introduced the 22-ton capacity bulk cement ‘Presflo’ wagon and, by the early 1970s, some 73 ‘Presflos’ were allocated to Clitheroe workings.
Primarily used to supply the Gartsherrie Works of the Clyde Cement Company (a Ribblesdale subsidiary) situated at Gunnie, near Coatbridge (North Lanarkshire), the BR ‘Presflos’ also handled a number of short-term flows from Clitheroe, with bulk cement being railed to Shap Summit and Burnley Central for use in the building of the M6 and M65 motorways respectively.
Between 1976 and 1979 some 10,000 tons of cement a year was also railed from Clitheroe to Hexham on behalf of the Northumbrian Water Authority for use in the construction of Kielder Reservoir, while in the early 1980s there were occasional trainloads of cement despatched to the NCB at Gascoigne Wood and to BR Civil Engineer’s Newton Heath Concrete Works in Manchester.