The Bury to Manchester Victoria line, now part of the city’s Metrolink tram network, is just under 10 miles in length and was opened by the Lancashire and Yorkshire Railway in September 1879 to provide an important link to the growing residential communities of North Manchester. 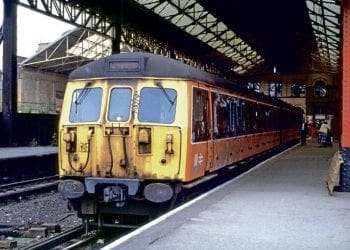 The L&YR was an early advocate of electrification and in 1916 the line was equipped with a unique side-contact 1200V DC third-rail system. This third-rail proved reliable, but other than being extended to the neighbouring Bury to Holcombe Brook line for a number of years, side-contact electrification was not installed on any other part of the rail network.
However, by the late 1950s, the original L&YR electric trains were showing their age and so British Railways decided to build a new fleet of 26 two-car trains for the line, retaining the unique third-rail power arrangements.
These trains were built at Wolverton Works, Buckinghamshire. They featured a driving cab at each end and were the first BR EMUs to feature a raked-cab front, which was also used on the AC EMU designs that emerged shortly afterwards – although the Bury EMUs featured a small destination indicator above the cab, whereas the AC designs had a larger route indicator panel above the cab.

Read more in the October issue on sale now.