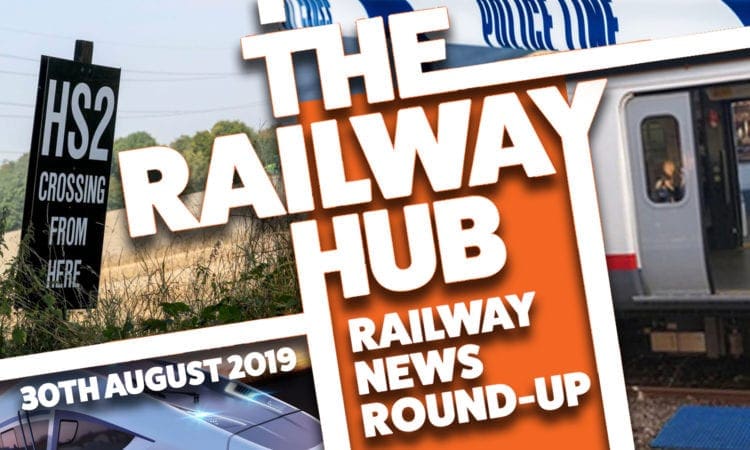 This week has been dominated by Brexit, Boris and HS2, all with the similar theme – uncertainty.

This week we also cover the bizarre story of a passenger train travelling with its door open plus a rise in violent crime on Britain’s railways this year.

A passenger train in Southend travelled with its door open for 23 minutes while the vehicle reached speeds of up to 80mph.

The Rail Accident Investigation Branch (RAIB) said: “At around 07:20 hrs on 22 August 2019, a passenger on a train travelling from London Liverpool Street to Southend Victoria reported to the driver that a door was open on the non-platform side at Hockley station.

The number of violent and sexual offences has increased on Britain’s railways, according to new figures revealed by the British Transport Police.

BTP have said that “with millions more passengers now using the railways across England, Scotland and Wales, the Force has seen an increase in recorded crime.”

HS2 railway to be delayed and exceed budget

HS2 could cost up to £22 billion more than its previous budget and be delayed by as many as seven years, the company building the railway said.

A report by HS2 Ltd chairman Allan Cook stated that the original plans “did not take sufficient account” of the effect of building a high-speed line through areas that are densely populated and with challenging ground conditions.

He added that the project’s budget has “proved unrealistic”, but added: “At the same time the benefits have been understated.”

Calls for HS2 building works to continue despite being over-budget

The building of HS2 should continue despite being behind schedule and over-budget, a business group has claimed.

Confederation of British Industry director of infrastructure Tom Thackray admitted the problems facing the high-speed railway are disappointing but insisted it “promises to bring huge economic benefits across the country”.

He went on: “The message from business on the project remains consistent – build it, back it, benefit from it.

Labour claims it was left out of HS2 review talks

Transport Secretary Grant Shapps has agreed to meet with Labour after the party claimed it has been left out of cross-party talks on the future of HS2.

Shadow transport secretary Andy McDonald has said despite the review into HS2 being cross-party, he had not been contacted by anyone in Government.

Mr McDonald said: “The Secretary of State has mentioned that a cross-party review is under way.

Eurotunnel is prepared for Brexit “no matter the outcome” on October 31, the company said on September 2.

The company said there would be no change to immigration formalities for the 22 million passengers per year who use the Eurostar or Shuttle services.