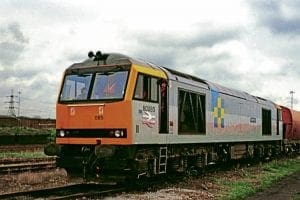 THE majority of my turns on the Washwood Heath job were spent as guard, and I regularly coughed and spluttered my way through 23 wagons in that dusty hopper house (as limestone comes in different sizes, some wagons did just contain simply dust!)
Over time, I became quite adept at setting them, which was just as well because I still had Popeye as a regular driver. On these occasions, he would often be teamed up with Catweazle, an amiable chap who, when not starring in a children’s television programme of the same name, would act as secondman. Between us, we had some memorable trips.
We once had a trainman learning the job, who I believe was a university graduate of some sort. He had certainly had more formal schooling than the three of us put together and, as a result, was completely unprepared for the weighty topics expatiated upon in a loco cab.

Read more in the latest edition of Rail Express