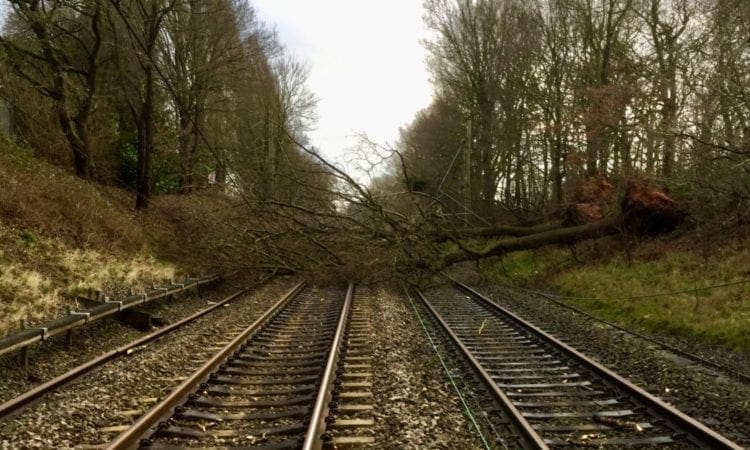 Dennis is likely to disrupt some rail journeys between London Euston, the West Midlands and Chilterns, Manchester, Liverpool, Lancashire and Cumbria.

With river levels high, the ground saturated and many trackside trees weakened, particularly in the North West, passengers were advised to allow more time – and to check before travelling at www.nationalrail.co.uk or with their train operator.

Jake Kelly, passenger director for Network Rail, said: “Storm Ciara dumped a month and a half of rain on us last weekend, leaving ground waterlogged and rivers swollen.

“We had a lot of flooding in the North West and a lot of it disrupted the railway, for example at Todmorden and Caldew near Carlisle.

“With Storm Dennis set to bring more high winds and further rainfall this Saturday and Sunday, we’re preparing for more of the same.

“Our advice to passengers is: Please check before you travel at National Rail Enquires or with your train operator.

“That way you’ll have the very latest information and you’ll know what to expect.”

Last weekend teams of Network Rail engineers worked to remove fallen trees and other debris from the railway. This included repairing damaged overhead wires and recovering sections of flooded railway.

In preparation, extra teams of maintenance and operations engineers are being drafted in across North West and Central’s three routes:

Householders neighbouring the railway are reminded to secure garden items which could be blown onto the tracks.

Passengers are advised to check before travelling at National Rail Enquiries.