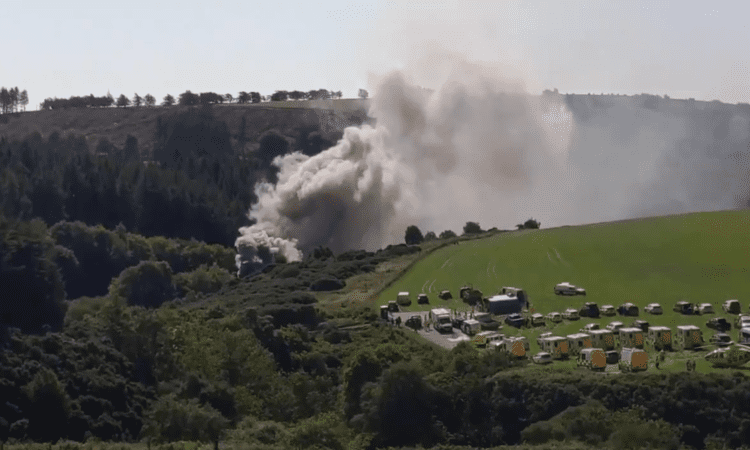 An investigation has begun into the derailment of a passenger train near Stonehaven in which three people died and six others injured.

The incident involved the 06.48 ScotRail service from Aberdeen to Glasgow Queen Street, which about a mile from Carmont level crossing at Carmont, near Stonehaven.

The train is thought to have hit a landslide or embankment erosion after severe overnight rain and thunderstorms caused widespread problems in Aberdeenshire.

The British Transport Police, the Rail Accident Investigation Branch and inspectors from the Office of Rail and Road are involved in the investigation to identify the cause of the crash.

The driver of the train and a train conductor – named locally as Brett McCullough and Donald Dinnie – are among those confirmed to have died in the incident by the British Transport Police, while another passenger has also passed away.

Their families have been informed and are being supported by specially trained officers.

The crash is the first involving a passenger fatality on UK railways for 13 years, the previous one was the Grayrigg accident in February 2007 involving a Virgin Pendolino train.

What do we know so far?

There is a lot of speculation around certain details of the train derailment near Stonehaven.

But we do know that the train involved was a 2+4 HST set recently refurbished and used between Glagow/Edinburgh and Aberdeen, Inverness, Perth and Dundee.

The incident occurred near Stonehaven in Aberdeenshire, not far from the Carmont level crossing. But, as you could see from some television coverage, terrain made the scene difficult to access due to trees and steep cutting sides.

We also know that, following huge thunderstorms and and a night of heavy rain, the nearby River Carron had burst its banks.

The 06.38 Aberdeen to Glasgow Queen Street service departed at 06.53, but reports of a derailment didn’t come until 09.43. The train had encountered a landslide and was returning back to Stonehaven when the derailment occurred.

Two services had passed the derailment location, one at 06.44 from Aberdeen to Montrose  and a second northbound from Montrose at approx 07.00.

Investigators will look at the forward-facing cab CCTV on all trains to see if any infrastructure defects are apparent.

As for the derailed train, one power car and a trailer car fell down an embankment and a fire broke out. Two of the remaining carriages ended up on top of the third. The other HST power car remained upright.

The Rail Accident Investigation Branch has begun an investigation. Preliminary findings are expected to be released towards the end of August.

Scotrail Managing Director Alex Hynes said: “Our thoughts are with those who have been affected by this tragic event, particularly the families of those who have lost their lives. The railway in Scotland is a family, and it’s one that is hurting today.”

The line will remain closed for some time as teams work to recover damaged vehicles and clear debris, some of which will need a large crane or vehicles to be cut up on site.

A review of CCTV footage at railway stations where the service stopped suggests there were nine people on the train, including crew.

British Transport Police believe all passengers had been accounted for.

Chief Superintendent Eddie Wylie said: “This is a tragic incident and first and foremost our thoughts are with the families and friends of those who have very sadly died this morning.

“We remain on scene alongside our emergency service colleagues, and a major incident operation has been underway. I would like to reassure the public that this was not a busy service, and from CCTV enquiries and witness statements we believe all passengers have been accounted for. However, once the area has been made safe then a full and thorough search will be conducted, which is likely to take some time.

He added: “I know many people will understandably have questions, and the investigation will be directed by the COPFS. We will be working closely with them, alongside the Rail Accident Investigation Branch and the Office of Rail and Road to establish the full circumstances of how the train came to derail.”

Kevin Lindsay, Scotland organiser for the Aslef train drivers union, said: “Our thoughts are with all those who died, and who were injured, in the tragic accident.

“While it is too early to speculate about the causes of the crash, it would seem that the appalling weather conditions in the area – the torrential rain – resulted in a landslip which, in turn, caused the train to derail.”

He added that the train had caught fire after rolling down a steep embankment.