Heljan has released a variety of 35t tankers, bringing a new version of the wagon immortalised by the Airfix kit.

RECENT weeks have seen Heljan add a further model to its ‘OO’ gauge wagon range, this coming in the form of the 35t GLW Class B tanker. First seen in 1957, the design was pioneered by Charles Roberts in conjunction with Esso, delivering a tanker with a 22t capacity that could operate at up to 60mph due to the fitting of roller bearings and vacuum brakes. 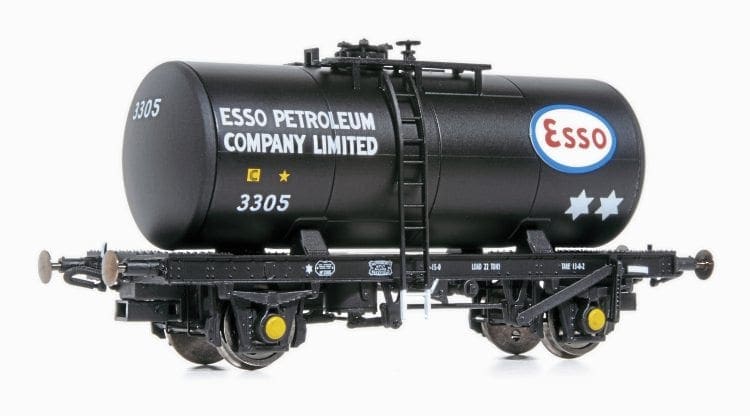 It immediately proved to be a success with the design also being adopted by other wagon manufacturers. A considerable number were built for Esso and other petroleum companies in the following years, with British Railways also taking a small batch for departmental use. The Esso Class B tanks remained in service into the 1980s, now carrying TOPS numbers and coded TSV but usually devoid of company branding.

Heljan has not been shy with the liveries, producing 11 different models. There are four in Esso-branded black, two with the original white lettering and two without, as pictured here. Also available are two tankers in Regent black, a pair in Mobil Charringtons red with different logo styles, two in United Molasses brown with either original or TOPS numbering, and a solitary example in BR black.

Read more in the April issue of RE – on sale now!