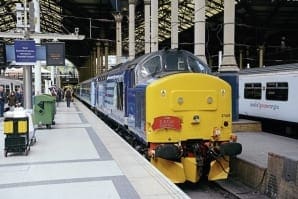 The railtour organised by Greater Anglia at the end of April offered the rare combination of two ‘37s’ on just four coaches and the chance of a non-stop run from Liverpool Street to Norwich.

To Norwich, non-stop
‘The EACH Express’ at Liverpool Street on April 30 after arriving from Norwich. No. 37405 was at the London end and No. 37419 at the country end, with the train formed of just four coaches. Paul Bickerdyke
IN railtour terms, Greater Anglia’s trip on April 30 was a simple offering.

Using the loco-hauled ‘short set’ that normally plies between Norwich and Great Yarmouth/Lowestoft through the week, ‘The EACH Express’ would run from Norwich to Ely and back, then Norwich to London Liverpool Street and back.

Its success, however, in raising around £20,000 for the EACH (East Anglia’s Children’s Hospices) proves that complex itineraries and multiple loco changes are not always necessary.

Read more in July’s edition of RE