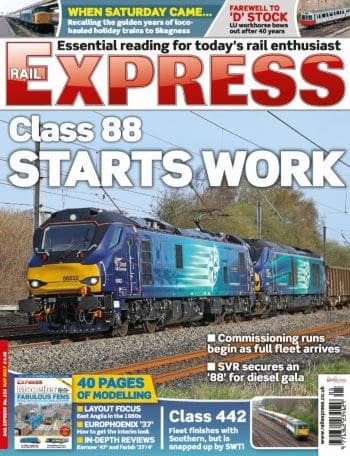 Looking back to the golden days of summer-dated holiday trains to coastal resorts, kicking off with this look at the Lincolnshire outpost.

London Underground is bidding farewell to its District Line workhorse – the ‘D’ Stock. We detail its career history, with insight from a LU driver.

A trip down memory lane

Example main line duties from when the Class 08/09 fleet did more than just shunting.

Putting a Northern ‘Pacer’ (and our columnist!) to the test in the Aire Valley.

May news from decades gone.

Power By The Hour

Our class-by-class round-up of notable workings.

Another DEMU car is scrapped.

Our main feature this month is an in-depth look at an ‘OO’ gauge layout based in the Fens in the 1960s. There is also news of Kernow’s Bulleid-designed diesels, plus reviews including Dapol MJA wagons, Gaugemaster ‘73s’ and a Graham Farish ‘37/4’.