THE article ‘Last Days Of The ‘Westerns’’ by David Russell (March issue) brought back some fond memories of this much-liked and followed class.

My own first positive sighting of a Class 52 was that of No. D1047 Western Lord (withdrawn February 1976), which I saw standing in Bescot Yard (circa 1974/75) while travelling by train to Birmingham New Street to do some spotting with a schoolmate of mine named Peter Finan. 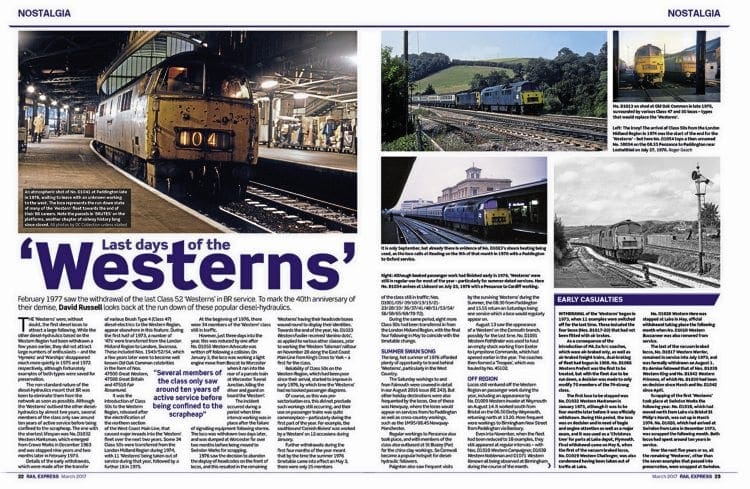 This was around the time members of the class were often turning up at Bescot on the Class 6 vacuum-braked ‘Clayliner’ services from St Blazey to the Potteries, as mentioned in the article – not to be confused with the ‘Clay Freighter’, which was a short-lived marketing name for an air-braked
clay slurry service between Burngullow and Sittingbourne for the Bowater paper plant.

The ‘Clayliner’ was originally booked via Westbury, Oxford and Bletchley, from where they were electric-hauled to Stoke-on-Trent. Their regular routing via Bristol, Worcester and Dudley (later via Galton Junction) to Bescot commenced in October 1973.

With regards to the fatal collision at Worcester in January 1976 involving No. D1055 Western Advocate, the loco had worked to Bescot with the loaded ‘Clayliner’, and was returning light engine due to there being no balancing return empties on this particular day. I believe it may have also been foggy at the time of the accident as well.

Another freight working to produce a ‘Western’ in the West Midlands for a while in 1976 was an afternoon Anglo-Scottish automotive departure from Oxford (Morris Cowley) to Bathgate. This travelled via the Sutton Park line to Walsall, from where an electric took the train forward. I believe members of the class may have also worked block tanker trains from South Wales (maybe ex-Llandarcy?) to Rowley Regis, although confirmation would be welcome.

Russell’s article also mentions the inter-regional cross-London freights between Acton Yard and Norwood Yard, which traversed the West London Line via Kensington Olympia. These were not actually stone trains as such, as mentioned (although they did work stone trains from Westbury to Leagrave, north of Luton, on the Midland Main Line), but out-and-back traditional Class 8 mixed wagonload freights – although I think coal may have been the main commodity taken to the Southern Region. I am pretty sure there were ‘Western’-hauled out-and-back cross-London freights from Acton to Temple Mills Yard as well.

Members of the Class 52 fleet also travelled over the WLL atop freights from Severn Tunnel Junction Yard to Norwood back in the late 1960s and possibly into the 1970s, although I am not sure whether they worked these throughout or just forward from Acton. The ‘Westerns’ also appeared at Kensington Olympia on Motorail passenger diagrams. Some cine-film footage of such a working to the West Country, featuring No. D1027 Western Lancer in May 1972, can be viewed on YouTube (the loco was withdrawn in December 1975).

Finally, at least one of the ‘Western’ farewell tours – the ‘Western China Clay’ (featured in the article) – was organised by respected author and photographer John A M Vaughan.

Read more Letters, Reviews, News and Features in the May issue of RE – on sale now!