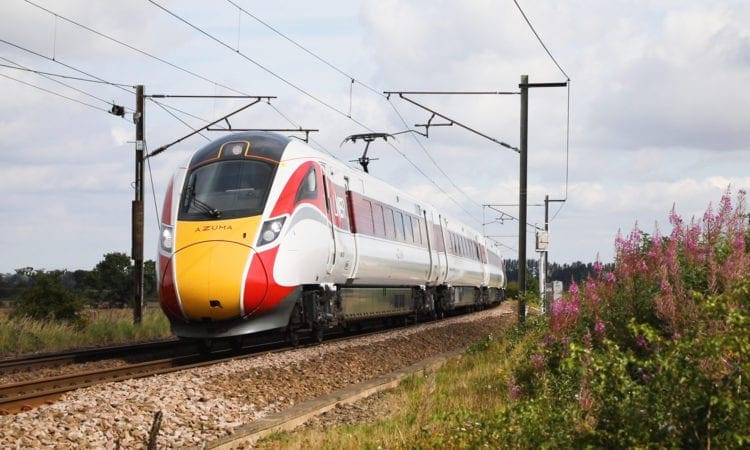 LNER launched its first passenger services on the East Coast Main Line on May 15, using the Hitachi-built Class 800 ‘Azuma’ express trains as part of a rolling programme to replace both its Class 91 and Mk4 and HST fleets.

The ‘Azuma’ will replace LNER’s entire fleet of trains

The entire LNER fleet of 45 ageing trains is currently being replaced with a 65-strong fleet of ‘Azuma’ trains. Each ‘Azuma’ has an average of 100 more seats than the previous trains. This means there will not only be more trains running, but each train will have more seats on it.

Overall, there will be an estimated 6,000 seats available on the LNER service every day. David Horne, managing director of LNER, told us that the rollout of the train will finish “by summer 2020”.

Standard Class has had a significant upgrade

In Standard Class there are several new features that improve the experience. Firstly, there is 7cm extra legroom available and a power socket at every seat throughout the train. There is also a new electronic seat reservation system, making it easier to see which seats have been reserved.

There’s also faster WiFi that is free to every passenger; all you need to do is make an account with LNER and you’re ready to go. The WiFi automatically searches for the best connection available to ensure a consistent speed throughout the journey, although there is restricted streaming so make sure to download any films or television shows beforehand.

The choice of a Japanese name comes from the fact the production is being overseen by Hitachi, creators of the Japanese bullet train. This is why the train’s design is reminiscent of the style of the bullet train, with its aerodynamic bullet-shaped nose.

The choice of the word east almost has a double meaning, partly because of its Japanese eastern roots but also because it is serving the East Coast mainline.

A new timetable is coming in December 2021

The ‘Azuma’ has a greater acceleration than the previous fleet, so in December 2021, LNER is aiming to make use of that by altering the current timetable.

This will mean reduced travel times across the service. For example, travelling from Edinburgh to London will potentially be up to 22 minutes faster. However, some areas will not have to wait until 2021 for new services.

Lincoln is already seeing changes, and on October 21 there will be four new outbound direct services between Lincoln and King’s Cross and four new inbound.

The ‘Azuma’ is more environmentally friendly

The new engines cut harmful emissions by 90% compared to the diesel-only High Speed Trains they are replacing. As they are bi-mode electric diesel engines, they will also run on electric where possible.

There will be lower noise pollution levels as these trains are far quieter than the previous fleet. As more of the railway lines become electrified on the East Coast, the ‘ will not have to rely on its diesel under-floor engines as often.

In fact, the train has actually been designed so the diesel engines can actually be taken out with ease, ensuring the ‘Azuma’ is ready and waiting to become a fully electric service.

Find out more about the train in our new documentary, Azuma: Train of the Future, available now with the October issue of The Railway Magazine!

This exclusive DVD follows the construction of the 65-strong fleet which begins in Japan and is completed at Hitachi’s purpose-built factory at Newton Aycliffe, Durham.

The Railway Magazine team joins one of the launch trains, talks to LNER directors about the how the exciting project evolved, and also visits the factory to see the Azuma trains under construction.

Sit back and enjoy a fascinating view of how a train is built, what the train looks like on the inside, and some dramatic aerial views of ‘Azumas’ running on the East Coast Main Line.

Get your copy now in stores or online here http://www.classicmagazines.co.uk/trm145

Two rail workers were killed by a train while there was no official lookout in place, a report has found.

Michael Lewis, 58, and Gareth Delbridge, 64, died while carrying out engineering work for Network Rail on the line near Port Talbot, South Wales, on July 3.

An interim report by Network Rail said one person should act as an unofficial “distant lookout” and warn of oncoming trains. But, they became involved with track work and were unable to alert their colleagues.