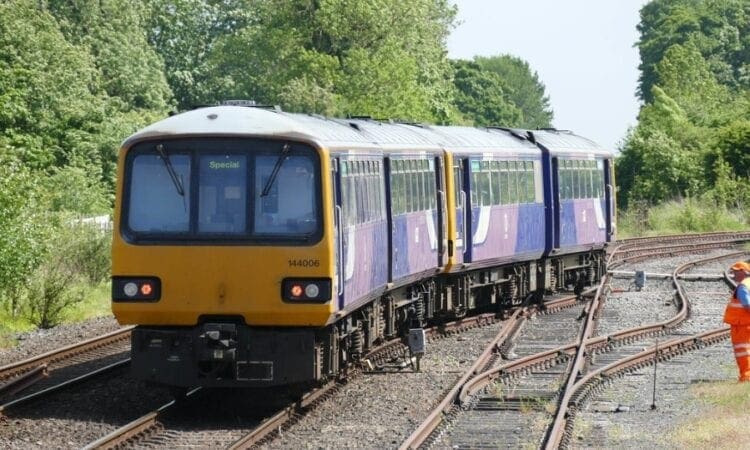 Cambrian Heritage Railways (CHR) has acquired a pair of Class 144 Pacer diesel railbuses from Porterbrook leasing. Nos. 144006/7 travelled under their own power by rail to Gobowen from the Keighley & Worth Valley Railway on Friday, May 22, saving four separate lorry moves.

The entire 23-strong class has recently been stored on the popular West Yorkshire heritage line by train operator Northern. With frequencies reduced due to the Covid-19 crisis, Northern did not have the required capacity to store the number of units no longer required during lockdown at its depots and outstations.

Currently stored in Gobowen station’s old coal yard – land which was purchased by CHR in 2016 – the units are expected to move to CHR’s Oswestry headquarters in due course. In the immediate future, the Pacers are set to available for use on CHR’s services from Oswestry to Weston Wharf, where a new station is rapidly taking shape alongside the popular Stonehouse micro-brewery visitor centre.

Crucially, the Pacers provide modern rolling stock with which to operate the Oswestry to Gobowen community rail service CHR is promoting with a number of local stakeholders. Earlier this year, CHR submitted a bid to the Department for Transport’s £500 million Restoring Your Railway Fund to reopen the line between Gobowen and Oswestry, via the Orthopaedic Hospital at Park Hall Halt. The bid was backed by North Shropshire MP Owen Paterson and the Chester Shrewsbury Rail Partnership. CHR is already in possession of a Transport & Works Act Order, which provides the legal powers to operate the line.

Mary Grant, Porterbrook CEO, said: “I was really excited when I learned about the plans for the heritage railway linking Gobowen and Oswestry. Porterbrook is always keen to work with community rail groups and I am delighted that we have been able to make available some of our retired Pacer trains for this very worthwhile project. I very much look forward to visiting CHR to see these trains as they embark on a new life serving both local people and visitors to this beautiful part of Shropshire.”

Other Class 144s in preservation

The Class 144s were built in 1986-87 at British Rail Engineering Limited’s Derby Litchurch Lane Works, with bodywork by Walter Alexander. Built specifically for local services sponsored by the West Yorkshire Passenger Transport Executive, the units have latterly been operated by Northern.

Other Class 144 units confirmed for further use on heritage lines so far include Nos.: